"The majority of Katrina's career has been in content creation, initially as a writer and later becoming a managing creative director for a boutique m... continue

There are many reasons to order a plant-based meal, none of which actually require you to be vegan. You may be tired of your usual order, curious about how it tastes, or you may just want to have what looks to be a really delicious dish.

Today’s plant-based fare comes in the form of some of the most popular dishes. Take the recently heralded Burger King’s Impossible Whopper, Del Taco’s Beyond Taco, and Dunkin’s Beyond Sausage Breakfast Sandwich — all indistinguishable from the rest of the menu, all made without meat.

But aside from a few high profile marketing campaigns, where else can you find some good plant-based food? Below, we’ve put together some of the best ones you may not have heard of yet, but definitely must try. 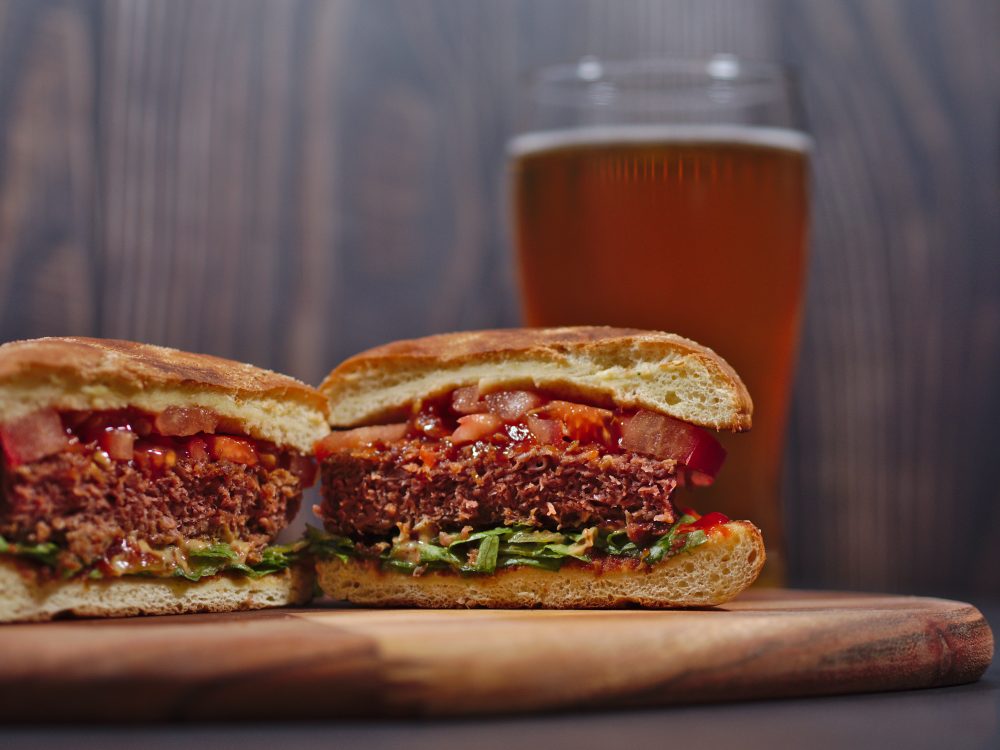 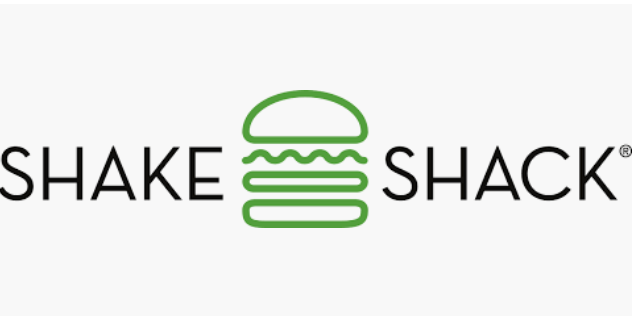 This cult-like burger chain was conceived as “a modern day roadside burger stand,” which meant it was only a matter of time before they came out with their own plant-based burger (sold in select locations).

The Veggie Shack has a patty of black beans, brown rice, and roasted beets, topped with lettuce, tomato, onion, pickle, provolone cheese, and Sir Kensington’s vegan mustard mayo. (To make it vegan, hold the cheese and swap the bun for their gluten-free option or a lettuce wrap.) 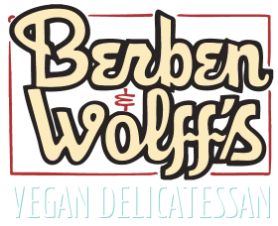 This completely plant-based deli rates five stars on both Facebook and Trip Advisor. And for good reason. Its renditions of the everyday sandwich are finger-licking good. Their Breakfast Sandwich comes with hickory seitan bacon or faux ham, the Po’Boy uses cornmeal-crusted oyster mushrooms, and the Reuben has house-made seitan pastrami.

A must-try is their Wing Burger. It’s made with your choice of buffalo or BBQ breaded fried chicken-style seitan, shredded carrot, celery, and ranch dressing on a toasted bun. All sandwiches come with a side salad, chips, and a pickle.

Unless you’re at a vegan establishment, you’re likely to have a select few plant-based options to choose from. At Bare Burger, you have eight meat-free burgers (out of 17). In a democratic approach, the restaurant offers an array of patties — Beyond Meat, the Impossible burger, and three of their own patty blends.

The crowd favorite is The Original, a quarter-pound Impossible patty with cheese, caramelized onion, dill pickle, and special sauce on a brioche bun. (To make it vegan, hold the special sauce and ask for vegan cheese and a sprout bun.) Add a Be My Vegan Shake or Mint Chocolate Cookies ‘n’ Cream, both make with coconut ice cream and organic hemp milk, and enjoy a complete plant-based meal. 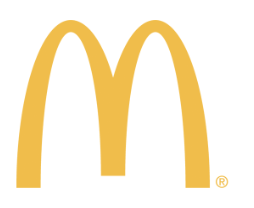 How has the largest fast food chain not jumped onto the plant-based bandwagon? Apparently, it has — very cautiously. McDonald’s launched a McVeggie burger in New Zealand, Veggie Dippers in the U.K., and The McVegan in Finland and Sweden.

Closer to home, in Ontario, Canada, they recently released their P.L.T. (yes, that’s Plant. Lettuce. Tomato.) made with Beyond Meat. Still on a trial run, there’s no news of any plant-based product to be released in the U.S. at the moment. 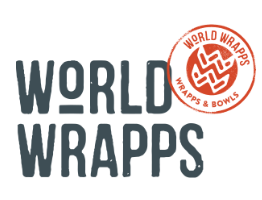 World Wrapps’s Beyond Bulgogi and Beyond Chimichurri

The “original wrap innovators” have had vegetarian-friendly menu options for a while, most of which were made of tofu. But thanks to the proliferation of plant-based products, World Wrapps has two new items.

The Beyond Bulgogi is vegetarian, and has Beyond Meat, sushi rice, tamago, cucumber, scallion, and pickled carrot. The Beyond Chimichurri is completely vegan, with Beyond Meat, brown rice/quinoa, lettuce, cherry tomato, pickled onion, and crispy shallot. Both come as either a Wrapp or Bowl. 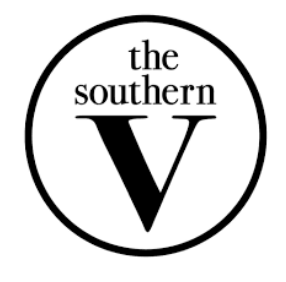 As “Nashville’s first 100% plant-based southern style eatery,” it’s no surprise that The Southern V has a lot of fried chicken on the menu (14 dishes, if you include the Kid’s Menu). The one that gets the most raves is their ‘Nashville’ Hot Chick’n Sandwich, which has three hot, crispy seitan strips, dipping sauce, and a choice of two sides — the potato casserole, veggie scramble, and cole slaw come highly recommended.

If you’re craving vegan food and you’re in Vegas, head over to Tacotarian. The restaurant claims to have the largest selection of vegan tacos in the universe, with over 14 different variations (a mix of faux meats or whole food plants). It also offers burritos, enchiladas, flautas, and of course, a weekend brunch. The tacos to try are the Al Pastor and Carné Asada, both made with seitan, and their Barbacoa, with chili-braised jackfruit. 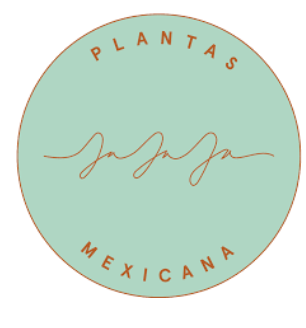 One of the most popular vegan Mexican eateries in New York had its start in Chinatown (it’s since opened two more locations across the city). Most ingredients are made in-house and the fare is definitely one of a kind — turmeric tortillas, fermented beans, and coconut queso. But one of the best-sellers is the humble Nachos, which comes topped with Jajaja’s chorizo, fermented black beans, turmeric queso fundido, and sour cream. 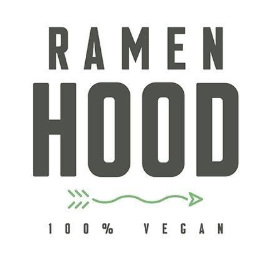 Ramenhood operates like most authentic ramen restaurants in that it has an extremely pared down menu. It has Ramen, Spicy Ramen, and a few side dishes. Unlike other ramen restaurants, Ramenhood is 100% vegan. The broth is made by pressure-cooking a mix of kelp, shiitake mushrooms, roasted sunflower seeds, and white miso. Each bowl is then filled with king oyster mushroom, bean sprout, scallion, chili thread, nori, and, if requested, a vegan egg made from soy milk, agar, nutritional yeast, and seasoning.

Spicy Moon specializes in Chinese Szechuan cuisine, which traditionally features quite a lot of meat. But looking at their menu, and you won’t even notice it’s missing. Spicy Moon has all the cuisine favorites, from Fried Vegetable Dumplings to Dan Dan Noodles to General Tso’s Mushroom. A popular order is the Vegetable Wonton in Chili OIl, which comes as six in an order. 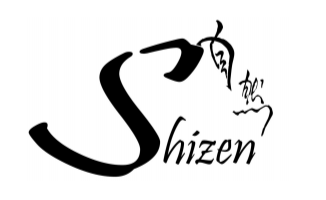 Rather than a meat-free menu, Shizen was created to specifically be a seafood-free menu, as well. That basically left plants, which the restaurant reimagined into vegan sushi, hand rolls, agemono, and other Japanese fare.

There’s no shortage of Asian food in the U.S.. But when London-based noodle chain Wagamama landed on local shores, the excitement among local foodies was palpable. 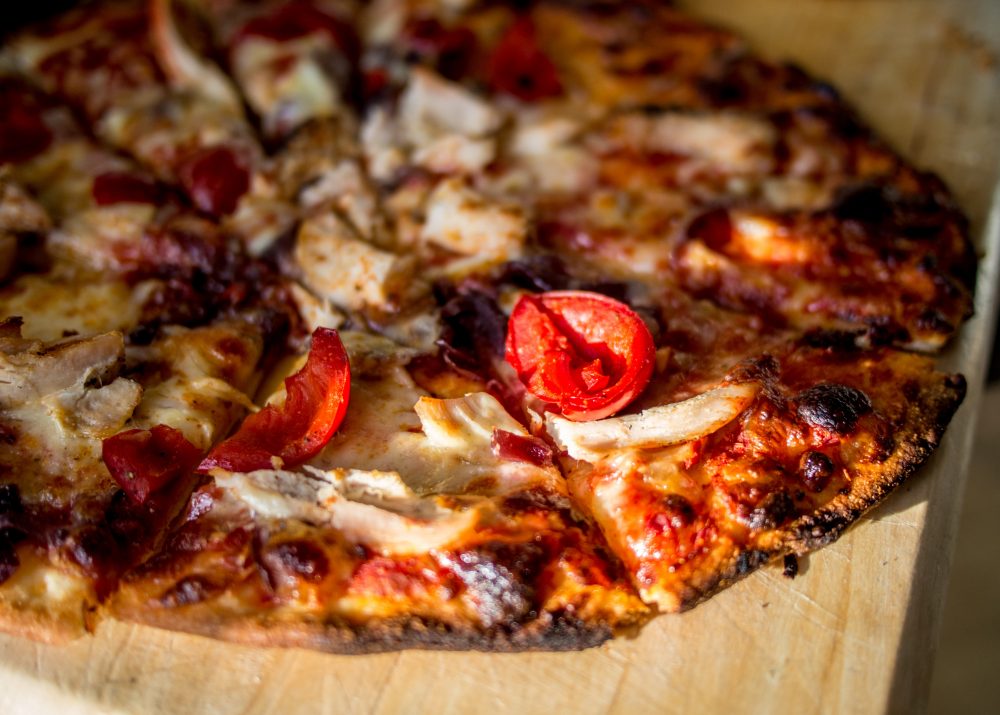 The idea that plant-based food won’t fill you up may be in the past. But can it hold its own against a traditional pan-style, deep dish pizza? Kitchen17 thinks so.

Their pizzas include a playful twist, with the favorite being their Fireball, topped with onion, green pepper, black olives, hot giariniera, jalapeño, and buffalo sauce blended with marinara. The Cheeseburger Pizza is also a stand-out, with actual pieces of burger and pickle, onion, cheddar, marinara, and “fast food sauce.” 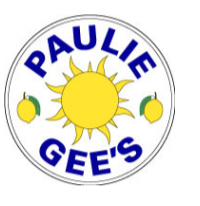 Paulie Gee’s takes pizza seriously. With five locations in the eastern U.S., two of them are just a few blocks from one another — one is specifically for serving Neapolitan-style pizza and one serves as a slice shop.

If you’re dining as a group, go for the In Ricotta Da Vegan Pizza, with tomato sauce, house-made vegan sausage, post-oven house-made cashew ricotta dollops, and baby arugula. For something quick, grab a slice of the Vegan Freddy Prince, an upside down Sicilian with tomato sauce, Numu vegan mozzarella, Beyond Meat sausage, Follow Your Heart vegan parm, and a sesame seed bottom. 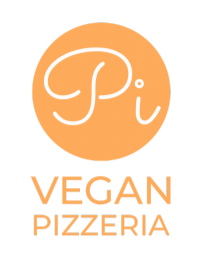 In addition to its merits of being “America’s Oldest Vegan Pizzeria,” Pizza Pi offers a solid stuffed crust option. The pie is filled with Teese vegan mozzarella and the can be customized with your choice of sauce (from marinara to sun-dried tomato cream sauce), cheese (Daiya mozzarella, house-made cashew ricotta, or house-made tofu feta), and a selection of plant-based toppings. 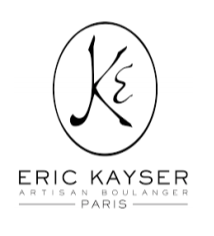 A French bakery known for its baguettes and other baked goods, Maison Kayser quietly rolled out its first plant-based pastry — a vegan croissant made with spelt and wheat flour, and topped with toasted quinoa. To complete your order, they’ve also added a few other light breakfast items, including coconut yogurt, chia pudding, and oatmeal, and raw dessert bars of mango, chocolate caramel, and tiramisu. 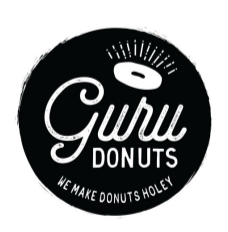 This is a donut shop that caters to every type of sweet tooth. It offers regular, gluten-free, and vegan raised donuts. Each one is made fresh from scratch every morning, with names like Katy Berry, Healthy Homer, and They See Me Rollin’.

But the plant-based pick is the Hipsterberry. It’s a ring topped with blackberry, blueberry, and lavender glaze. They also created The Impossible Donut (no relation to the meat substitute), a gluten-free Idaho potato donut with vanilla cinnamon glaze and buttercream. 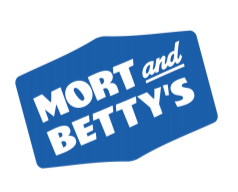 To the lovers of pastrami, lox bagels, and kreplach, Mort & Betty’s is here for you. The vegan Jewish deli operates as a pop-up, which means its food is made fresh in small batches.

While the menu changes depending on the location, a few staples are Carrot Lox Shmear, Corned Beet Reuben, White Carrot Whitefish, and Mushroom Pastrami. Their specialty is The L.B.C. (Lox Bagel Cream Cheese), where you can choose from all their vegan fixings. 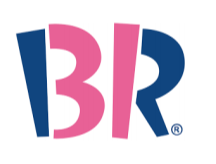 All flavors have a base of coconut oil and almond butter for a smooth, creamy texture. Plus, they’re Kosher and free from artificial flavors, dyes, preservatives, and high fructose corn syrup. (However, they do contain soy and nuts.)

TCBY has always been seen as a healthier alternative to other dairy-based desserts. And to its credit, it did introduce plant-based products relatively early in 2014. In a partnership with Silk Almondmilk, it offered the first dairy-free almond milk-based frozen yogurt in Chocolate and Vanilla Almond flavors. Soon after came the addition of a Coconut Flavor Coconut Milk Fro-Yo, also using Silk’s Coconutmilk variant. 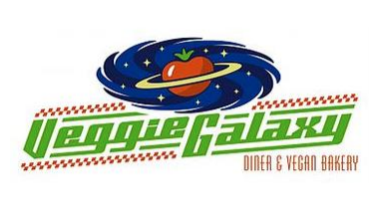 Veggie Galaxy has reinvented the old school diner concept. They make their food from scratch, all of it is vegetarian, and everything can be made vegan. For example, its breakfast plate has corned beef seitan hash, and its french toast is topped with coconut whipped cream and caramelized banana butter. But save room for dessert — their coconut-based Berry Sundae is one of PETA’s Top 10 Vegan Ice Cream Sundaes in the U.S.

Imagine escargot beurre, boef bourguignon, and steak tartare. Now imagine them plant-based. This is what Delice & Sarrasin has done. The 100% vegan French restaurant takes the most traditional French dishes and makes them all without meat. A few favorites include the Plateau de Fromage, an assortment of artisanal cashew cheese, the Soupe a L’Oignon Gratinee, and its selection of savory crepes.

“Eat plants. Drink Beer, Be happy.” This is the unofficial tagline of The Beer Plant and a compelling case to have yourself some plant-based bar chow. They use cashew cheese in the Mac ‘n’ Cheese Skillet, banana blossoms as pulled “pork,” and palm hearts for “crab” cakes. Their best-seller, however, is their Buffalo Cauliflower Wings, which pairs perfectly with a nice cold craft brew. 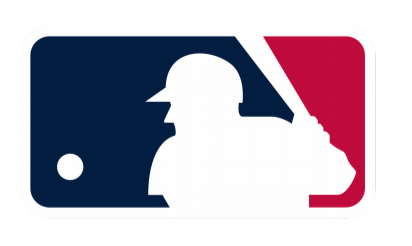 What’s watching a ballgame without some ballpark chow in hand? Now you can enjoy that  chow no matter what your dietary preference.

While there are over a hundred vegan-friendly stadiums across North America, Peta gives special mention to their top ten. Taking first place is the Globe Life Park (Texas Rangers), with a menu of Beyond Meat burgers and tacos and Lightlife Jumbo Smart Dogs. Also in the list are Oracle Park (San Francisco Giants), Dodger Stadium (L.A. Dodgers), and T-Mobile Park (Seattle Mariners). 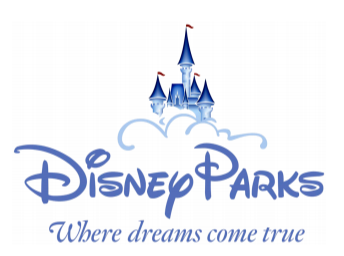 "The majority of Katrina's career has been in content creation, initially as a writer and later becoming a managing creative director for a boutique magazine. Since then, she has transitioned to online projects, creating written and visual pieces that best speak to the market."... continue

How Technology is Revolutionizing Food Preparation

25 Plant Based Burgers You Need To Try

The 25 best plant- based dining options in the not-so-obvious cities.

Restaurant Trends to Monitor in 2020

Plant Based Diet: More than a buzzword

6 Takeaways from the NRA Show